TRUCKERS in Demand in US What's Really Driving The Supply Chain Crisis? 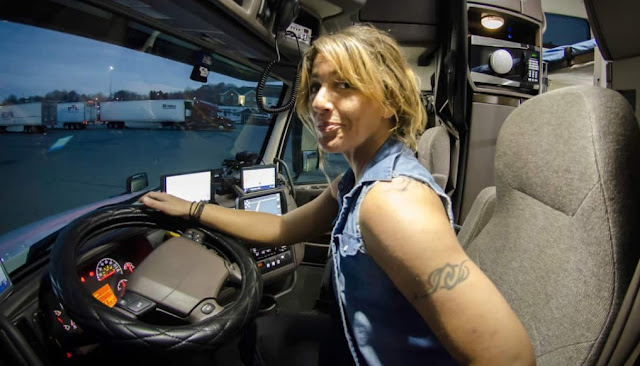 You know we've really seen a lot of talk about trucker shortages are hitting record highs, the united states is facing a truck driver shortage truck….
There's no shortage what there is shortage of is uh more union contract jobs, so that that's the only shortage that that's really there

America's ports are backlogged with shipping containers, the media wants you to think a truck driver shortage is to blame…. But there is no truck driver shortage, there are 15% more drivers than a decade ago.
The real issue is truckers have been increasingly mistreated and exploited for profits, for decades, driver compensation has dropped 40 percent since the 1970s. 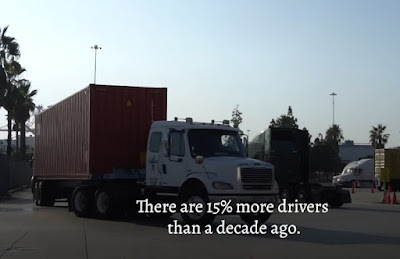 Port truck driving as it is right now can be compared to share cropping, these drivers are essentially paying to work they have to pay for their diesel, their insurance, you know their tags maintenance on tires etc so sometimes these drivers will have to owe the company on insurance costs because they weren't able to fulfill their work.
Companies overwhelmingly treat truck drivers at the ports as independent contractors, not employees…. This forces costs onto drivers that the companies should be paying driving down wages for truckers. 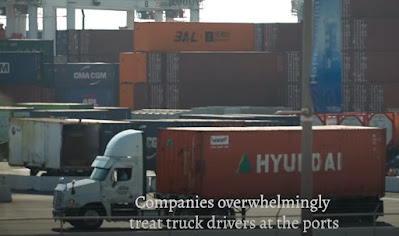 Sometimes even misclassified drivers you won't make nothing you'll show up to work and actually be in the red, you'll buy lunch, you'll pay for your fuel, and you'll be in the red, for that day because you weren't able to secure a loaded container out of that port let me sell you one being a misclassified drivers but you could be your own boss, you could be your own company, you could own your own truck, one day but really it's just a big rip-off… you end up paying all these fees and pay for a truck that'll never be yours i actually went through that.
So that's where the first scheme shows up you know these companies erroneously classify them as independent contractors so they can deny them insurance sick leave, you know during the pandemic PPE unemployment insurance you name it.
The deck is stacked against you someone's like going to Vegas thinking you're really going to win, when the fact of the matter is not set up for you to win, the misclassification of workers has led to extreme inefficiency at the ports.
Where drivers can wait hours for cargo loads, for no pay, this means the same companies exploiting workers by refusing to treat them as employees are also the ones throwing off the supply chain, but the roots of this crisis go back decades to the deregulation of the 1980s when working conditions and pay for truck drivers started to plummet as full-time union jobs were transformed into contract work. 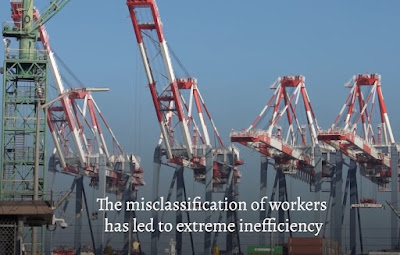 Everyone knows that truck driving was a very lucrative career it was a ticket to the middle class it was a majority unionized workforce, and what this current crisis demonstrates is that the system, this race to the bottom that the trucking industry has engaged in, is what has caused and exacerbated this problem that we're facing right now.
Trucking companies misclassify their drivers left and right in this race to the bottom, they're also union busting to prevent workers who are employees from organizing for decent pay and benefits….. in 2018 logistics company universal logistics holdings fired a group of drivers at the ports of los angeles and long beach after they successfully voted to form a union with the teamsters, then they replaced their former employees with independent contractors. 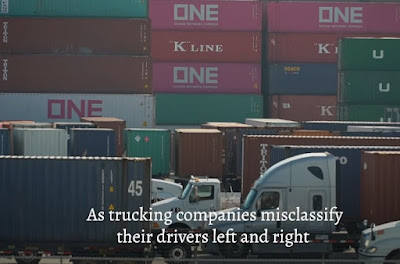 TD 5
On december 3rd of 2019 we overwhelmingly won our election, two weeks later we're let go…. Just out of nowhere out of the blue we just let go i'm talking four days before Christmas.
The reason i think they fired me was for retaliation because they knew i was really really involved, i was very outspoken i would actually uh get into it with the union busters , so the national labor relations board has since ruled that the firings were illegal and that universal logistics holdings must reinstate its workers and give them back pay, but the company has continued to act with impunity and fight against the ruling, even as its net income has risen 28% from 37.5 million in 2019 to 48 million in 2020.
i landed on my feet i actually accepted a job for lower hourly wages, but better medical better better health care vision diddle um a guaranteed 40-hour work week and it was a union job, being the union driver at these ports is completely  different from being a misclassified driver.
Again right now the narrative that it's a lack of of jobs is absolutely incorrect there are plenty of drivers who want to work you know, the lines are absolutely backed up what it is, is a shortage of good union jobs, we're seeing a lot of words thrown around like retention programs, recruitment programs, but folks are missing the point….. the point is that drivers want to work but they want to be fairly compensated and in order to do that we need to regulate a heavily unregulated system………
by markir
Email ThisBlogThis!Share to TwitterShare to FacebookShare to Pinterest
Tags DIY, JOB OPPORTUNITIES
Newer Post Older Post Home

ALL ABOUT JOBS OPPORTUNITIES

I'm constantly looking at different ways of teaching you similar stuff, to reinforce so that it clicks with you and what i actually di...